There are many useful FrameMaker plugins out there, but one of my favorites is FrameSLT by West Street Consulting, operated by Russ Ward. I was reminded of how powerful it is when I recently helped a client add structure to a large number of unstructured documents. One issue was a very specific sequence of elements where text nodes needed to be wrapped in <cmdname> elements. In the screenshot below, I have the text nodes indicated by red rectangles. The yellow highlighting indicates the specific context where the text nodes needed to be located. 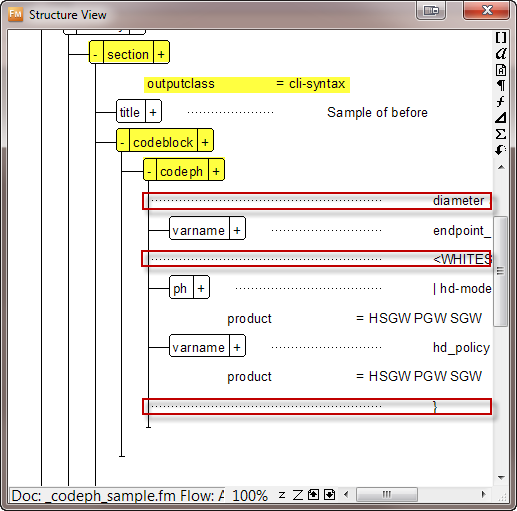 END_OF_DOCUMENT_TOKEN_TO_BE_REPLACED

I have developed a FrameScript solution for one of the “bottlenecks” submitted to me a couple of weeks ago. A common problem is imported graphics reported as missing when files and folders are moved or renamed. The FrameMaker user actually wanted the ability to rename screenshots and quickly update the references to them without reimporting them. But this solution would normally be used to quickly “repoint” images to new folder paths.

The result is a set of FrameScript scripts called ManageImagePaths. Here is how the solution works:

END_OF_DOCUMENT_TOKEN_TO_BE_REPLACED

Here is a FrameMaker tip that doesn’t require any plugins or scripts. When you are working in a FrameMaker dialog box with Include/Don’t Include list boxes, you can quickly move all of the items from one list to another by holding down the Shift key and pressing the left or right arrow key (highlighted in yellow in the screenshot). To quickly move a single item in the list, you can double-click on it. 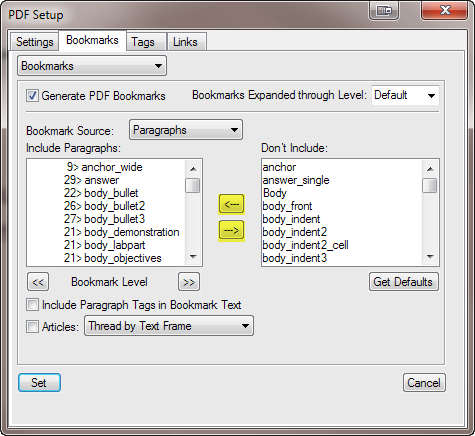 File this one under the “learn something new every day” category. This question was posted on one of the Framers lists today:

Our documents have the potential of being generic to be used in multiple manuals. To achieve that, our safety icons are in a common location. The FM files and associated graphics should always be together. When we move the folders to another manual, everything should remain relative. With FM8, writers go to our server and open a file, if the graphics are not positioned correctly, the writer updates the location and FM8 changes the location to absolute. Subsequent files that are opened and saved change the graphic path to absolute and do not ask for the path change. Is there any way to shut this off so that if a file is opened and the relative path is incorrect, that it asks for the path update? The only other way of verifying the path is to do a LOR.

I spoke to the author of the post to make sure that both his FrameMaker file and image were on the same drive; he assured me that they were, so I couldn’t see any reason why the link shouldn’t be relative instead of absolute.

END_OF_DOCUMENT_TOKEN_TO_BE_REPLACED

FrameMaker automation is not all about FrameScript and plugins. Sometimes a tip or shortcut can increase productivity, and even small increases add up over time. If you have a FrameMaker tip or trick that you would like to share, please let me know. If I publish one of yours I will give you a free Carmen Publishing Inc. plugin of your choice.

END_OF_DOCUMENT_TOKEN_TO_BE_REPLACED

Last week, I posted a request on the Framers and FrameScript mailing lists, requesting your “favorite” FrameMaker bottlenecks. By bottlenecks, I mean the tedious, error-prone FrameMaker tasks that you have to perform. Or, it could mean a missing feature that you wish FrameMaker had.

I received a hand full of thoughtful responses, but one request I think would be the most useful would be a way to manage FrameMaker images. Here is an excerpt from the email I received:

My bottleneck is graphics — naming graphics consistently, and then finding and updating graphics in a document/book and getting rid of old graphics no longer used. For example, for a current application to which I am writing, I am having to document a Wizard that does function “X”. I am now on my third iteration of this wizard and all of the pages in the wizard have changed again. I need to recapture 10 screenshots and replace them in my current document. I know that I can save the new captures with the same name as the old captures and in the same location because I import by reference but, that’s not really handy for me because the previous captures are named RunWizard_Page1, RunWizard_Page2, etc. and >>NOW<< the Wizard is going to be named the Project Wizard and so I would like to take new captures name them ProjectWizard_Page1, etc. and somehow get these to replace my old captures rather than having to reimport, save them with the new name and/or delete the old named captures. Am I asking for the moon?