To purchase TemplateTools for a low, introductory price, please visit our solutions store.

Here is a video of the full webinar demonstrating TemplateTools.

Thanks to the generosity of many, Jason and I have reached our fundraising goals for the Ride! As a result, I am withdrawing the offer for the scripts. Thank you for your help!

If you attended the webinar on April 29, 2015, you saw some realistic examples of using ExtendScript to automate FrameMaker. The scripts are well-commented and ready for production work. If you are learning ExtendScript, you can use many of the functions and techniques in your own scripts.

Here is a PDF that describes each script.

Thank you for your generous support of a great cause!

For those that received the scripts by donating, or saw them during the webinar, I am interested in your questions and feedback. Please add a comment to this post, and I will start a new post to discuss your questions and comments. 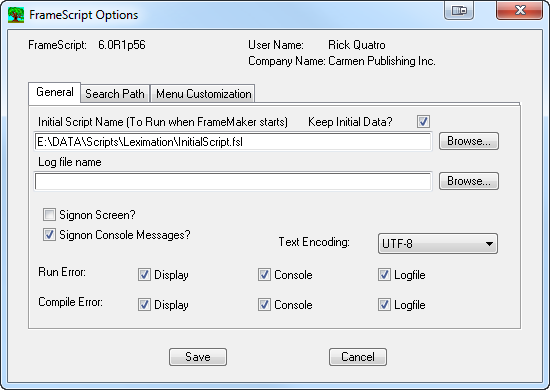 Bruce Foster, creator of many fine FrameMaker plugins, passed away suddenly on Saturday, June 11, 2011. Although Bruce had been diagnosed with multiple myeloma in September 2010, his death still came earlier than was expected. Bruce’s plugins for FrameMaker were BookInfo, ImpGraph, MifSave, MifToFM, RtfSave, and his most famous, Archive.

If you donate $40 or more to either of us, I will give you a copy of the ExtendScript version of PageLabeler or ImportFormatsSpecial. Both of these have been written in ExtendScript for use in FrameMaker 10 and higher. To see the documentation for these scripts, click the links above. For a $75 donation, you will receive both scripts, including the source code.

If you are using FrameMaker 9 or below, I will send you the plugin versions instead. Be sure to email me to tell me what you would like to receive after donating.

Thank you very much for your support!